From another site where we were discussing abortion

In reply to [person]:

You had me until:

NOBODY believes in it, but the choice is what we have to fight for

Follow me here as we take a trip down “Logic Lane”…

We all agree that abortion ends a life that, ultimately, has no control over its circumstances. Logically, if the statement you made were true, then we could apply it elsewhere and see it work. Let’s apply it to euthanasia – no one WANTS to have to make that choice, but – for some, it’s something that they HAVE to make at one point or another. Logically, it fits. Let’s apply that to rape. No one BELIEVES in them, but we have to fight for the right of someone to want to rape someone else. Let’s just work to make them “less frequent, and safe”. Ok, that may be a little hard for some to see around here. What about child abductions? No one BELIEVES in them, but the choice of men and women to abduct children is what we have to fight for.

See, you’ve crafted a response that works for you, and only for you, in your personal understanding. I still read abortion as the end of a human life. I’m not the one who gets to choose what life is more valuable than another and I’m sure you’ll agree that you’re not able to do the same. Just because a life may not be important to you, that life may be very important to others, and definitely to that of the child whose life is ended because the mother chose to do so. Rapes are horrible, horrible events – I’ve seen the result of them on women very close to me throughout my lifetime and I could never begin to understand what they must go through. I cannot see, however, why the baby has to be punished. In my mind, I see two crimes occurring here – the first is the rape where the helpless victim is the mother – the second is the murder where the helpless victim is the child.

You can wrap as much speech around it as you want – the point still exists that if you’re campaigning for “abortion rights” you’re campaigning for the right of a mother (or in some cases a government) to kill a helpless human being. This isn’t about responsibility – it’s about doing the right thing. Give the baby up for adoption. Take the millions of taxpayer money that go to Planned Parenthood and put them into local pregnancy clinics and programs for unwed mothers. Relieve them from the stresses of the pregnancy by helping them through the process and financial responsibility of the birth and give them the ability to do the right thing.

Last Wednesday, I spent some time cruising around on the net collecting information. I based my following image on the percent of reported births, plus the reported abortions that were received by the CDC. You’ll notice that the dates move around quite a bit – that’s because it’s the last time the state reported their abortion numbers to the CDC. In about 2004, some of the states quit reporting numbers. Every year the number just aren’t reported for more and more states. Instead of guessing, I pulled the latest accurate numbers. The percentage is based on the total of viable pregnancies reported and only those states that aborted 20% or higher of their reported viable pregnancies are listed. 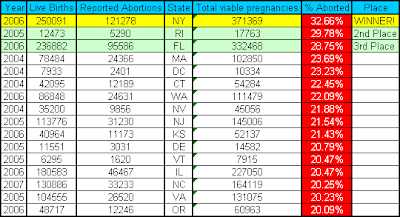 That statistic sickens me. Why are so many women having abortions?

The reasons women give for having an abortion underscore their understanding of the responsibilities of parenthood and family life. Three-fourths of women cite concern for or responsibility to other individuals; three-fourths say they cannot afford a child; three-fourths say that having a baby would interfere with work, school or the ability to care for dependents; and half say they do not want to be a single parent or are having problems with their husband or partner.

Nationally, the average is 22% of all pregnancies end in abortion (not including miscarriages). Is this the right you say we should all fight for? The right to kill 22% (1,200,000) of our children every year?

Really? How is this progress? I stand by my statement before – if God tarries and we’re allowed to continue on, in a hundred years we’ll all stand back and look with disgust and horror at those who applauded the efforts of “medical professionals” and “women’s rights” that allowed us to kill more than 1 in 5 children for the sake of “choice”.

This makes no sense to me at all – how is it that people can’t see the problem with abortion?