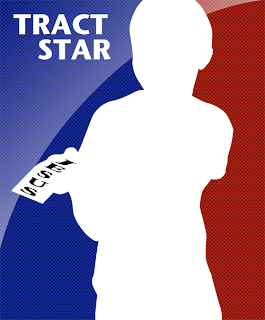 A few weeks ago I got an idea for an image and the more I thought about it the more I liked the idea. It kind of formulated for a couple weeks until I finally was able to sit down on Friday night and crank it out. The picture is actually of my daughter handing me a Million Dollar Bill Tract which I then took my time putting together. As much as “Jesus junk” drives me nuts, so much so that I nearly walked out of LifeWay two days before Mother’s Day while I was buying my wife Kirk Cameron’s new book (apparently it’s awesome)and had to wade through the letter openers, mints, chunks of rock, candy, and gift bags labeled with prosperity gospel garbage. *shudder* Anyway, since it drives me so nuts I was worried about making something that would be heretical but the more I looked at it the more it looked like something I’d like to see on a shirt. I threw together a CafePress shop to see how it’d look and to be honest, I kind of like it. I figure it’s something that people who are actually concerned about evangelism (and who do pass out tracts/witness to people about salvation through Jesus Christ) could wear. More than that, youth groups who are working on evangelism training could walk use it as incentive as well. Not that witnessing is a sport, nor do I feel that it is demeaning to the cause of the Gospel, rather I think that it’s a nice way to encourage evangelism in the youth.